BECAUSE I DEMANDED IT!!!

The year 1994: From out of space comes a runaway planet, hurtling between the Earth and the Moon, unleashing cosmic destruction. Man's civilization is cast in ruin.

A strange new world rises from the old: a world of savagery, super science, and sorcery. But one man bursts his bonds to fight for justice! With his companions Ookla the Mok and Princess Ariel, he pits his strength, his courage, and his fabulous Sunsword against the forces of evil.

He is Thundarr, the Barbarian! 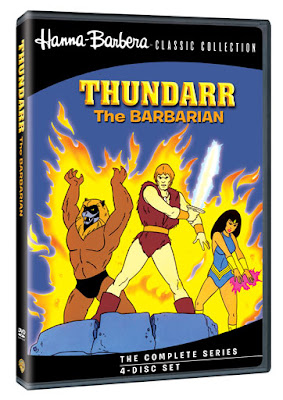 Since links don't seem to work here, here's the the address:

Apparently, it is exclusive to the WB Shop, so... go, watch, exclaim: DEMON DOGS!
Posted by Gary Lee at 11:51 PM 3 comments: Links to this post

CRAIG FERGUSON on the LATE LATE SHOW on CBS does this great bit every once in a while and I can't get enough of it.

Posted by Gary Lee at 2:41 AM No comments: Links to this post


OTHER WORLDS by ~Ragnaroker on deviantART
Posted by Gary Lee at 12:50 AM 3 comments: Links to this post

I suppose any comics fan who keeps his eyes trained to these www thingies knows by now that pictures are leaking of the CAPTAIN AMERICA film. You've probably seen them, but have you seen them THE GOODS way? Here we go kids:

Below we have some hep cat tooling around Europe (we assume) in his roadster and it is a spiffy ride. Considering the hat and the advanced look of the car I'll assume we are seeing the automobile of a high-ranking Nazi (Red Skull, Baron Zemo, Baron Von Strucker, or even Hitler hisownself). Odd, though, that there are no swastika flags... hmm. 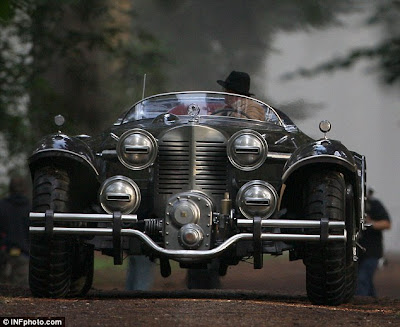 One of the things that tips off the Nazi roadster looks to be his escorts, a couple of killer motorcycles that look like they came out of the Batcave: 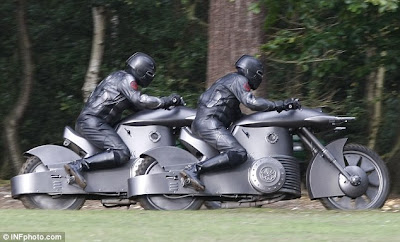 And here we have the star of the show riding quite the sporty Army motorcycle, which we can only hope has some kind of tricked out gizmos so that our fair hero has a shot at keeping up with the Fuhrer's fellows: 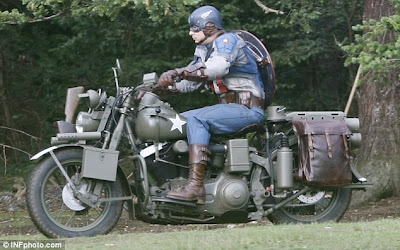 Below, we see some technical folks getting things ready for the shoot, while Cap awaits the order to follow that Nazi. Meanwhile, note the cool holster for the rifle on the front of his bike: 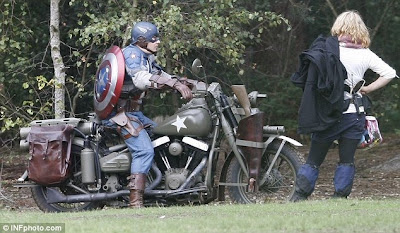 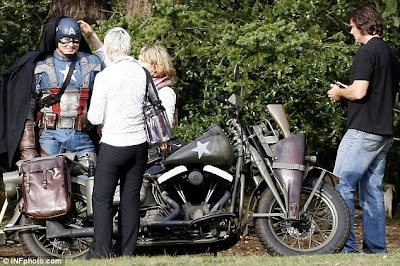 Finally, we see just how excited Captain America is to join in the fight against Nazis, that or he's happy to see his assistant: 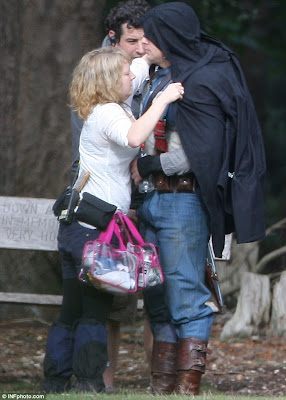 But seriously, folks, I really had my doubts about this look for Captain America. The drawings of it made it look much too modern for WW2--meaning that it didn't look in step with the military garb of the time and, more importantly, as faithful to Captain America's look as it should. Here on film, on a dude, it actually looks plausible. I wish it were a darker blue, but it may show up on screen darker. I wish the two red stripes on the front of his uniform didn't look like (and actually function as) some sort of suspenders. I truly would hate it if I were thinking in my head the whole film: "LarryKingLarryKingLarryKing..."

As is the case with THOR, I will wait and see more so that I can be prejudiced against it more accurately as we get closer to opening day for the film.
Posted by Gary Lee at 1:00 AM 2 comments: Links to this post

THAT'S WHY THE LADY IS A VAMP


VAMPING FOR THE CAMERAS by ~Ragnaroker on deviantART
Posted by Gary Lee at 6:05 PM No comments: Links to this post

WHATEVER KNOWS FEAR BURNS AT THE MAN-THING'S TOUCH!

Began the usual introduction to the MAN-THING in the old Marvel comics. You see, anything that knows fear burns at the hands or touch of the Man-Thing! So, unless you're Daredevil, the man without fear, you're screwed. He premiered from Marvel Comics Group very close to the time that their Distinguished Competition debuted Swamp Thing. Both had the same man trapped in the body of a monster theme, only Man-Thing seemed pretty much mindless--wandering into a different human drama every month. Wasn't that fortuitous for the series?

He has a more distinctive look to him than Swamp Thing does, mainly due to his huge hump back on top of which sits the strangest head of any creature walking the nine worlds. Imagine three thick green ropey vines dangling around two huge ruby red orb eyes and you get the gist of him.

So somebody over at deviantart brought up Man-Thing as the subject of the day's challenge a few days ago and this is what I came up with first:


OUT OF THE FOG by ~Ragnaroker on deviantART

And this was second:


I COME FROM THE WATER by ~Ragnaroker on deviantART


GIANT-SIZE MAN-THING by ~Ragnaroker on deviantART
Posted by Gary Lee at 1:26 AM No comments: Links to this post