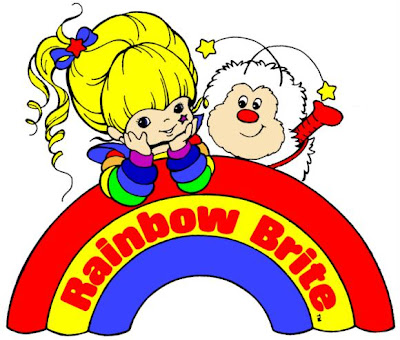 “Rainbow Brite is a little girl who “can bring sprinkles of color to the darkest day and put a bright smile on a little girl’s face.” She is a cute little girl. She often is seen gliding through the air on her magical flying horse, Starlite. Rainbow Brite and her friends live at the end of the rainbow where all the colors of the earth are created. This sounds very cute and perfect for little girls. But, take another look. This toy and cartoon series is laden with occult symbolisms.

Rainbow Brite lives in Rainbow Land with her friends, the Color Kids, and Sprites, the happy little workers who mine and manufacture Star Sprinkles. It is Rainbow Brite’s job to fight the forces of gloom in order to keep the world bright and filled with color and happiness. In doing so, she often meets with horrifying monsters. Although Rainbow Brite is fighting for a worthwhile cause, the intensity and violence of these scenes are much more than any five-year old can handle. Yet, it is for this age group that the cartoons were designed.

The very basis for this series, the rainbow, also causes concern for many Christians. Although many people collect rainbows, primarily for their colored beauty, few realize their significance. According to the Word of God, rainbows are a symbol of God’s everlasting covenant that He never again would destroy the earth by flood. But for New Agers, those who uphold the tenets of the New Age Movement or Humanism, the rainbow holds a different meaning. New Agers use “rainbows to signify their building of the ‘Rainbow Bridge’ (antahkarana) between man and Lucifer who, they say, is the over-soul. 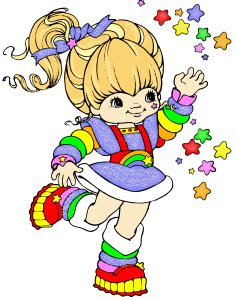 Now we can see that he’s grasping for straws with Rainbow Brite. First he brings up the violence and monsters (can’t even remember them, must be because I had to block out the memories). Then again, I wasn’t a regular viewer, so I could be misremembering. How scary WAS Rainbow Brite? Was it scarier than Kolchak the Nightstalker or Salem’s Lot or even Scooby Doo, shows I saw at about the same age? I shall have to check the YouTubes...

So because the rainbow can even be percieved as meaning something other than what the Bible states, it has to be disqualified completely as a symbol for the good Christian child? What bothered me most was that the author used the term “Rainbow Bridge” and failed to mention that it is the bridge to Asgard, realm of the Norse Gods. Disturbing, for me, especially, as it ignores all of the good old Pagan talk that the writer could’ve used to fuel his rant. Ah well, I guess he had to set up more of the Anti-Humanism talk for later in the book...

There you have it, kids: Rainbow Brite is not only symbolic of the occult, it is too dark and violent for any five year old to handle.

Posted by Gary Lee at 10:29 AM No comments: Links to this post

Fear and Self-Loathing in G-Vegas The above is my latest finished piece 11" x 17"--done for a friend of mine by the name of Gary Davis. His characters, his super-team, his universe. I was just the art robot. A very average robot, but a robot in any case.

Artistically, it is a challenge to try and fit that many characters onto a page and show them off at the same time. I feel generally okay about the art, but there are, as always, quite a few qualms with it. Mostly dealing with my continued lazy background work, my inability to lay it out in such a way as to feature a full figure for all of the characters, etc. There's always from for improvement and believe me, there's lots here.

Nevertheless, he was happy with it. So that's something.
Posted by Gary Lee at 1:02 AM No comments: Links to this post 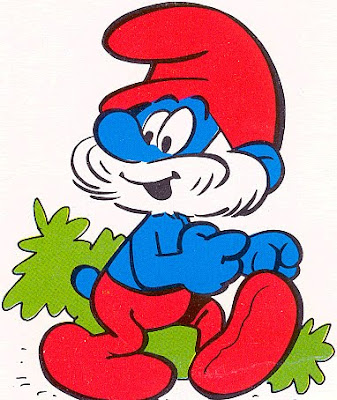 TURMOIL IN THE TOYBOX by Phil Phillips
Excerpt from page 76 and 77:
"Many forms of the occult are contained in this cartoon. The most obvious display is through the character of Papa Smurf. Every time the Smurfs have a problem, they go to Papa Smurf who whips up a spell or recites an incantation to help them out. These are very strong images to the child's mind. As Christians, we want children to learn to call on the Lord Jesus to help them through problems. In His Word, God tells us to trust Him and only Him. He tells us not to rely on practices such as witchcraft to solve our problems. Nevertheless, children will not learn Godly principles if they are constantly saturated with images of characters using witchcraft and other occult practices to solve their problems." 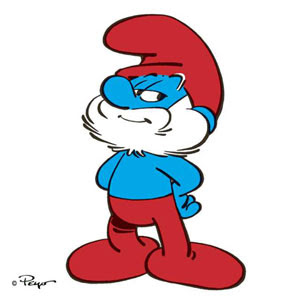 Remember kids, stay away from Grandpa when seeking sage advice, ask only that old man in the sky. Do not look these blue characters in the eye as they may bedevil you into following the ways of that Old Scratch feller! Stay beJesused now, y'hear! 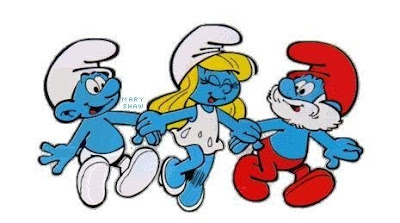 Posted by Gary Lee at 2:02 AM No comments: Links to this post