You’ll notice in the following list of films I’ve watched this year (take note that this isn’t all the movies I’ve seen this year, but the majority and certainly the ones that were released in the last few years) that not all of them were released this year.  I don’t strictly go by release dates, but I do generally follow that rule when compiling a list of films each year.  Take “Silver Lining’s Playbook” for instance, it came out in late 2012, but I only saw it in early 2013, so that’s where I’ll count it.

Anyway, this is the list of the films that I saw,
the grade that I give
and a few paragraphs about the best of the bunch... 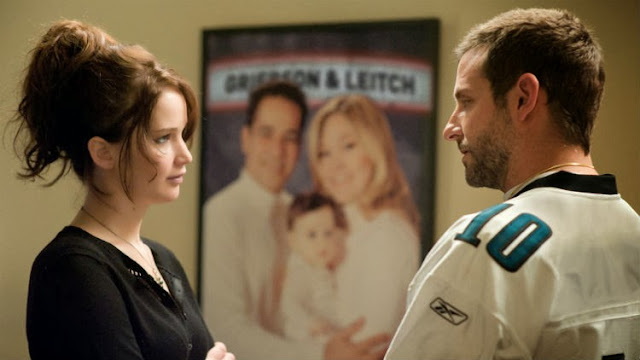 Silver Lining’s Playbook
One doesn’t come to me for a good grade on a film about an emotional wreck trying to prove that he’s okay to move back out into the world (played here by Bradley Cooper) and the woman who is trying to deal with and move on from the early death of her husband (played by Jennifer Lawrence)—this is usually the kind of film I’d rather not pay to see in a theatre.  Rather to watch it it at home, if at all.  The performances and the script are smart and snappy and one genuinely likes these people, so it’s kind of a pleasure to watch.
Grade: A 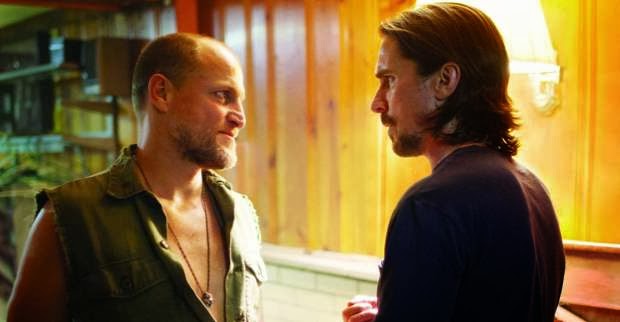 Out of the Furnace
Working class folks living in the dryed out bones of a once thriving steel mill town dealing with a dying patriarch, money troubles, post-traumatic stress and addiction issues.  Christian Bale is as solid as ever, Casey Affleck is as hard-headed as he can be and Woody Harrelson is meaner than he’s been in anything, including “Natural Born Killers”.  Oh, Woody’s meaner, but not scarier—Mickey & Malory are Joker Scary.  Nevertheless, this dark plotted picture of an America that is as bleak as can be packs a punch that will have you feeling it months later.  Another reason why I look at Rotten Tomatos and ignore it.
Grade: A 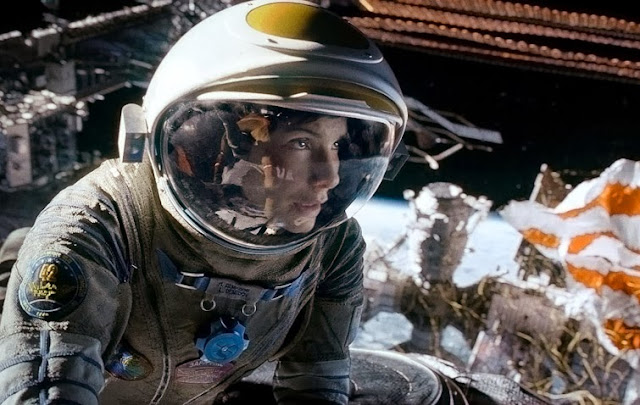 Gravity
Nerdy girl in space disaster!  It was hard to tell what this film was going to be from the earliest trailers—supernatural sci-fi horror, I wondered?  But as the trailers kept coming it looked like a simple disaster in space kind of thing, and so I still wanted to see it, but at least I knew what it was aiming at.  Great performances by Bullock and Clooney, in fact, probably the best I’ve seen Bullock in anything.  An easy-on-the-eyes thriller of both emotional and mental impact.  A beautiful movie.
Grade: A- 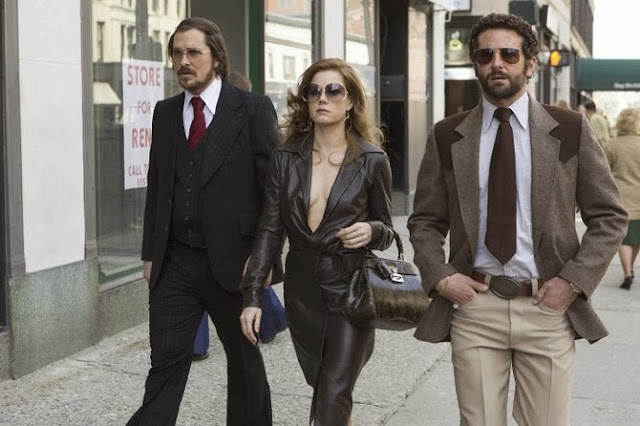 American Hustle
Christian Bale put on a gut for this one—gained a load of weight and had to dress up his head with the worst combover in the history of film.  The man LOOKS like he’s a scam artist, but he gets his fish anyway.  Hell, the way he tells the story of the film, he pulls you in with the story of falling in love with Amy Adams’ character, only to slip it in later that he’s already married to Jennifer Lawrence’s handful of a wife character.  And the thing is, you’re happy for him, you want him to do well, to make it.  He seems a fine fellow.  And that’s why he should get the Oscar.  Amy Adams is a smart and beautiful, Bradley Cooper is ambitious and corrupt, Renner is a crafty politician—the acting and story are seamless.
Grade: A

The Wolf of Wall Street
As smoothly and sleekly as it rolls off of the screen and onto your eyes and back into your brain.  As smart and funny and dramatic as it is, the telling of this tale of ultimate overindulgence and debauchery may have as little meaning as most of the acts in it!  Still, it’s told so well and it’s so fun to watch…
Grade: A- 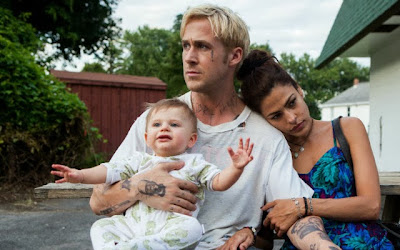 The Place Beyond the Pines
In reality this is two films, two lives that are linked together by desperation and fear.  Bradley Cooper’s cop who learns the hard way about corruption in law enforcement and Ryan Gosling’s circus cyclist who takes too many risks breaking the law to provide for his family.
Grade: A- 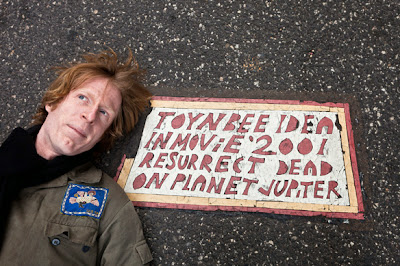 Resurrect Dead: The Mystery of the Toynbee Tiles
In Philidelphia, some time in the last 20 years, there appeared what people call tiles on the streets there.  They are the kind of tiles that are easily recognizable as the work of an obsessed person.  This documentary explores one man’s search for the person or persons responsible for these strange tiles that have since been discovered as far away as South America.  It’s kind of what they say about the journey being the point, more than the destination.
Grade: A- 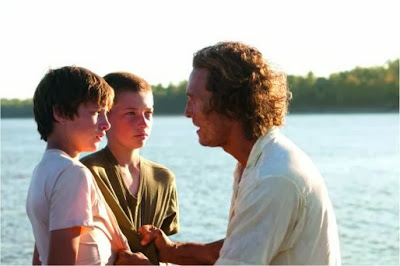 Mud
I always enjoy stories involving kids dealing with the problems that adults usually struggle with.  Its adds a depth to children in fiction that is too often left out, it makes them more real, and their story more believeable.  Here there are typical problems and then there’s the matter of Matthew McConaughey, who is equal parts big brother and drunken uncle to these two boys living on the river ind the deep down delta of the Mississippi.  A fine bit of work on his part and the rest of the cast, including Reese Witherspoon in a small role.
Grade: A- 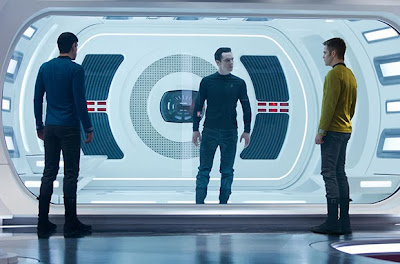 Star Trek Into Darkness
Going into this one, we all heard the rumors that seemed all too obvious about Khan being the big bad wolf in this film.  Granted it is the second of a new series of Trek pictures, but that doesn’t mean that Khan has to show up.  Heck, this is a whole other bag of continuity as the old Trek universe leads directly into this alternate reality, thus creating a whole new “bag”.  But still.  How can you not use Khan?  I mean, seriously.  So, they do.  And that Cumberbatch fellow makes quite an impressive Khan, even though he’s not that fine corinthian leather-skinned Ricardo Montalban!  So, it’s good stuff—AND we get Klingons!  And this makes me really look forward to the next one.
Grade: A- 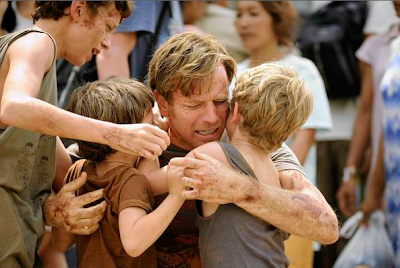 The Impossible
This is another film that came out last year—one that I didn’t get around to until this year.  The true story of a family that gets swept away by the tsunami that made the news a few years ago.  Naomi Watts and Ewan McGregor play said couple brilliantly and the child actors in this are top notch.  The chaos, the isolation, the days and days of waiting and then… waiting some more.  Probably the best disaster movie I’ve seen considering that it’s not so much about the tsunami itself as it is about how it effected the people caught in it.  It also serves as another reminder to me of why I never go to third-world countries.
Grade: A- 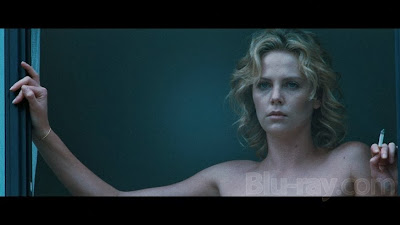 Burning Plain
Charlize Theron is a mess in her current life.  Jennifer Lawrence is coping with her mother’s sickness and her father’s abscence by taking on more responsibility around the house than an average teenager should.  This is one character played by both actors as we explore how the life of the younger character leads to the mess that is the adult.  Well written and stark and dark as can be, this one sticks with you.
Grade: A-

You’re Next
Horror fans may remember the french film “High Tension”, in which a woman goes to stay with a friend from college and a serial killer comes to murder everyone and then the story turns at the end and it’s kind of a mind-fuck.  Well this is about half that and about half “The Strangers”, which is more a mean cult people show up and torture you in your home kind of thing.  Except there’s more and that more I won’t give away.  A good twist on your average stalk and kill, slasher picture.
Grade: A- 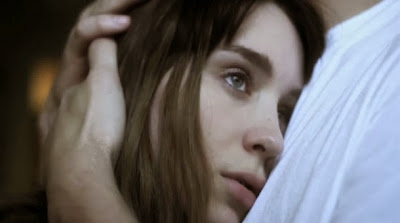 Side Effects
After watching Rooney Mara chew up the scenery as the girl with the dragon tatoo, it was a treat to watch her working here, as a woman struggling with depression issues and medication trouble.  Only this film takes twists and turns and Jude Law is probably at his best as a psychiatrist struggling to deal with the circumstances of what his patient has done.  And then there’s more twisting.
Grade: A- 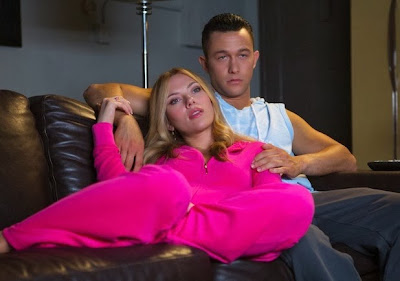 Don Jon
Equal parts character study and stylish tour-de-force film making, Joseph Gordon-Levitt handles the whole thing here and it ends up a thrill-ride through a character really coming of age (a decade or so late).  Julianne Moore is great as a kind of mentor to the one-track-minded Don.  Scarlet Johansson is swell as the Jersey Girl girlfriend with just as many personal hang-ups as her boyfriend.
Grade: A-

Here are the "B+" graded films that didn't quite make the "A" list... I give a sentence on why they are worth a viewing...

This is the End — Swinging ten-ton demon penis!  —Grade: B+

The Perks of Being a Wallflower —  Coming of age again. —Grade: B+

Kings of Summer — And even more coming of age.  —Grade: B+

Zero Dark Thirty — Jessica Chastain getting it done.  —Grade: B+

The Guard — Brendan Gleeson and Don Cheedle as partners.  —Grade: B+

We’re the Millers — National Lampoon’s Vacation with pot.  —Grade: B+

Jeff Who Lives At Home — A man gives his own life meaning! — Grade: B+

Last Exorcism —  A ruse of an exorcism meets real demons.  —Grade: B+

Hobbit: The Desolation of Smaug — Action & adventure are here! —Grade: B+

Anchorman 2: The Legend Continues —  The ‘stache is back —Grade: B+

Thor: The Dark World —  Thor does the smiting, Loki the scheming.  —Grade: B+

The Lone Ranger — Somehow it all works out in the end!  —Grade: B+

And here are the rest of the fairly recent films I caught in 2013...

And with that, we wish a happy hello to the new year and the possibilities of films to come!
Posted by Gary Lee at 9:23 PM No comments: