Met yet another challenge over at DeviantArt yesterday. Batman was the subject (he seems to be the subject all too often) and I decided to throw in this quickie I came up with at Nostalgia when the gang started throwing around the idea of the new Batman series not being entitled "BATMAN INC." but being "BATMAN INK". What tatoo would Batman have, I wondered...


I HEART JUSTICE by ~Ragnaroker on deviantART
Posted by Gary Lee at 1:37 AM No comments: Links to this post

HALLOWEEN OF THE DEAD

The date has finally been announced for the premiere of THE WALKING DEAD on AMC and it is HALLOWEEN night!

THE WALKING DEAD is based on the Eisner Award-winning comic book series written by Robert Kirkman and drawn by Charlie Adlard. And it is self-described as "Survival Horror" fiction. A look at how life must be led in a world overrun with zombies.

Posted by Gary Lee at 9:03 PM No comments: Links to this post 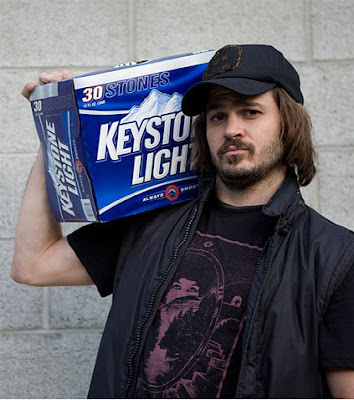 I'm no beer drinker, but if I was... Keith Stone is the pitchman for me:

No other human on the planet has his skill with the extra large stick of beef jerky:

Posted by Gary Lee at 11:28 AM No comments: Links to this post

GUY DAVIS AND THE GOOMBAH OF DOOM

Earlier this year at Heroes Con Charlotte, I was able to meet the soft-spoken and completely neat artist of the vast majority of B.P.R.D. comics, Guy Davis. And, I might add, his charming wife Rosemary (whom I'll post a little bit about later).

Anyway, my friend, Jeff, and I were there after having just met Mike Mignola and we notice Guy Davis is right there beside where Mike was set up. An obvious pairing, no doubt. But he was doing little free sketches for the masses and we went up a begging. Jeff got the best pulp hero created after 1990--Lobster Johnson. And I wanted to get something different from Thor (who I always ask for) so I said, draw what thou wilt! And this is what he drew: 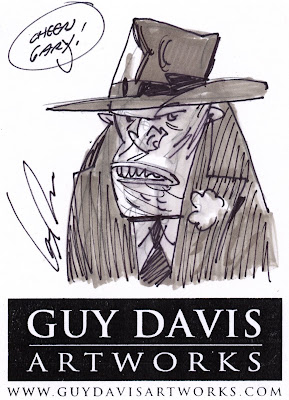 I call him the Goombah of Doom because I can't say for sure if he's a character from ZOMBIES THAT ATE THE WORLD, which I have yet to get around to reading. I can swear that my great grandfather was pictured in a suit and hat just like this one! Scary, ain't it?
Posted by Gary Lee at 12:55 AM 1 comment: Links to this post

IKARIS OF THE ETERNALS

Somebody over on Deviant Art had the good sense to suggest to the Daily Sketch Challenge Group to draw Ikaris of the Eternals created by comic book GOD Jack Kirby. I smiled, I picked up pencil and I drew the below--trying my darnedest to pull off a Kirby pose. 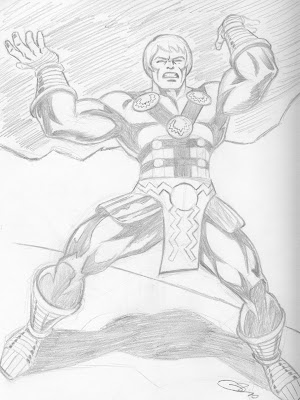 The outfit wasn't as hard to draw as I expected.
Posted by Gary Lee at 2:07 AM No comments: Links to this post

Figured that I might as well dump out the photos about the 2011 THOR film that I've accumulated so that I can move on to other subjects, so here goes:

Above we have concept art for the film, your classic Thor versus Loki imagery. 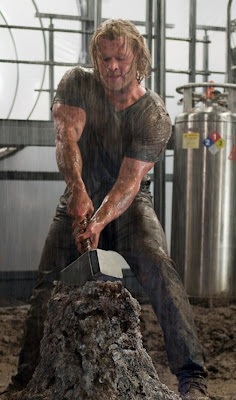 Probably the money shot of the preview photos we've seen so far--grasping Mjolnir in an attempt to prove himself worthy. 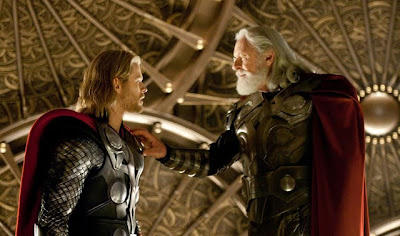 The above has Thor looking up to his father, the All-Father, Odin. 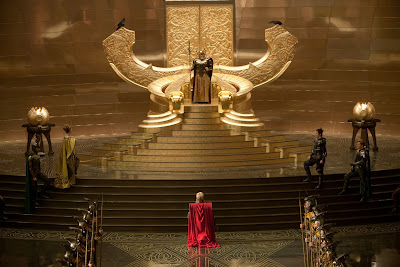 Here we have an establishing shot of the throne room of Asgard (click on these photos for a better look). Odin at his throne (which looks quite a bit like it could be a sword's hilt--the Odinsword?), Loki and Frigga to the left, Hogun and Fandral to the right (where is Volstag?) and Thor kneeling at the bottom of the steps. Very big hall. We see Loki's helmet and everyone else is without theirs, though it looks like Thor might be holding his under his arm. 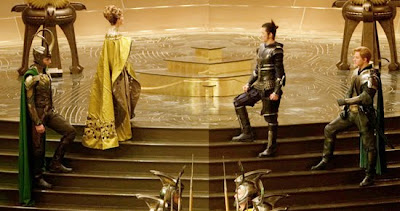 Someone has altered the previous photo and pulled these two sides of the royal court together for a closer look. 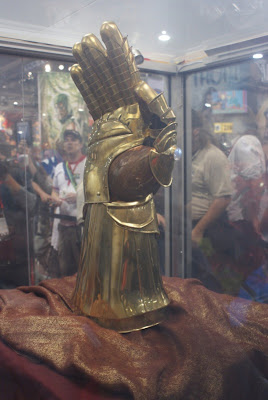 Finally, we have the biggest mystery of the THOR film to date--the Infinity Gauntlet. Not really a Thor storyline that involves this powerful item, but I'm thinking it may have something to do with either the Captain America or Avengers films. Waiting and seeing...
Posted by Gary Lee at 12:27 AM 3 comments: Links to this post 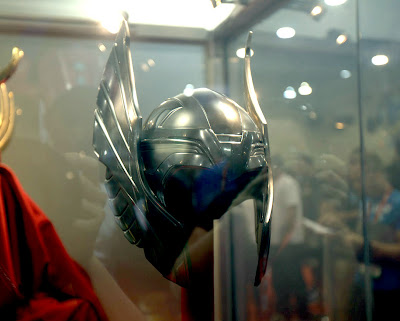 Here we have Thor's helmet, the one piece of the Thor costume that we weren't allowed to see before the San Diego Comic Convention. And, after much anticipation and worry, it turns out to be a somewhat faithful version of the helmet. Closest to the one he wore during a part of Dan Jurgens' run as writer of the series (shown below): 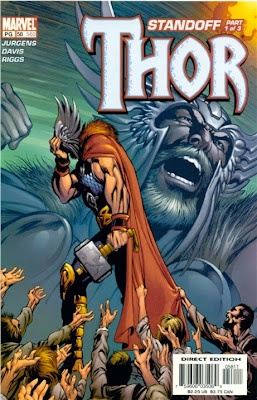 Probably my least favored of all of Thor's helmets besides the one Erik Masterson wore when he was splitting a body with Thor: 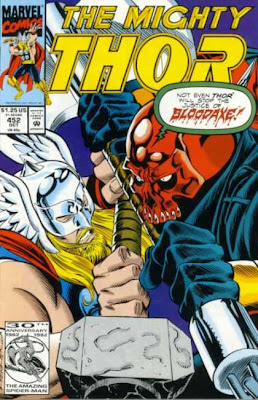 Even though it's a helmet, it just doesn't work for me to cover up Thor's face.

So we have our hat and it looks pretty good. Now we just need to see him wearing the dang thing!
Posted by Gary Lee at 1:52 AM No comments: Links to this post